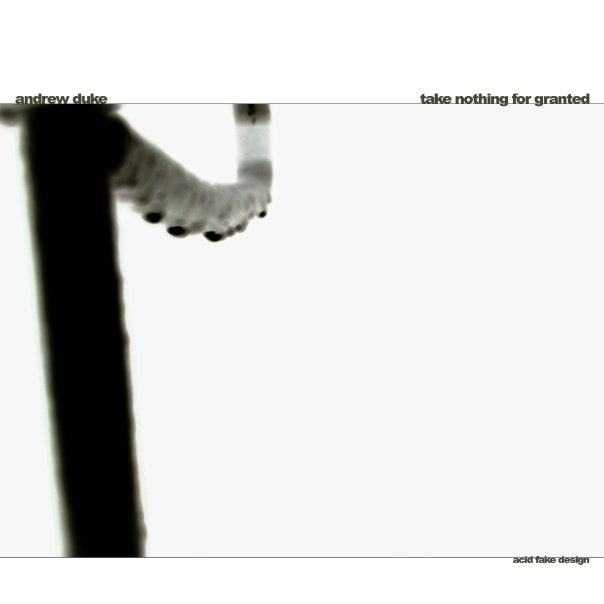 Take Nothing For Granted is the only album from Andrew Duke that was released in 2003, and follows up the "Environmental Politics" EP that was released on Seattle's and/OAR imprint earlier in 2003. Like the stripped down starkness of the album's graphics, the music on Take Nothing For Granted is subtle and detailed, at times almost brutally so. As with Duke's other albums, the album's name and song titles speak to socio-political themes, again without bombast or pretense.

The Wire UK
It's easy to overestimate the importance of a composer's geographical location when considering their music, but you can't help thinking that in the case of Andrew Duke, there might be some relationship between the militant starkness of Take Nothing For Granted and the fact that he resides at an acute remove from many of his contemporaries in Halifax, Nova Scotia. Duke has been refining his approach to minimal digital composition since the late 1980's, and the very least you can say about the latest of his many releases is that it's the work of a man very much in control of his idiom. Take Nothing For Granted is a series of sparse, crackling spaces whose chilly crevices are animated by ultra-sparing dub techniques and a radical approach to stereo placement. A track like "Suture" is well named: as it gathers skeins of renegade sound slowly together, its meticulously incremental progress is a perfect analogy for the operation of the album as a whole. (Chris Sharp)

Minor Germany
Full-length album from the Canadian artist Andrew Duke full of atmospheres and glitch sounds. Most tracks are cool stuff for home-listening; some develop a certain rhythmic groove and slightly touch the danceable aspects of noise-(art)-music.

The Vibes Italy
Great sounds! What a shot for our ears! Wittgenstein wrote: "The work of the philosopher consists in assembling reminders for a particular purpose". But I'm not sure he was really speaking about philosophers, having listened to Take Nothing For Granted. (Vito Camarretta)

Vital Weekly The Netherlands
Take Nothing For Granted is by Andrew Duke, a renowned Canadian artist, who has had releases on Bip-Hop and Bake Records. Duke's music is much more about rhythms, although rarely about dance music rhythms. Duke keeps his rhythms to a strict bare minimum and within one track he explores that rhythm…things are nice and minimal, with small and gradual changes. He comes close to the more austere works of Pan Sonic, Ikeda, or Goem here. (Frans de Waard)

Wreck This Mess The Netherlands Inspired expansive and yet minimalist beautiful cotton-pickin' in the glitch fields of tomorrow; unusually composed glitch that combines freeform, soundscape, breakbeats, dissonance, and ambient. Reaches my Top 20 for 2003. (Bart Plantenga)

Ultra The Netherlands
Take Nothing For Granted features eighteen engaging post-minimal techno soundscapes--somewhere beyond Monolake goes Eraserhead, grittier, and at times more industrial-sounding than your typical glitch electronica. The tracks range from 0'41" to 5'24", making for a varied album. (If you're in for more variation, check Duke's other albums as well, e.g. the more "intelligent techno"-sounding Sprung). (Patrick Vandenberghe)

Cyclic Defrost Australia
Andrew Duke has been involved in the Canadian music scene as a composer, musician, and author for years. Whilst he has released albums on Staalplaat, the impressive French label Bip-Hop, and Acid Fake, his musical output has been quite diverse, rarely settling on one style for an extended period of time. This restlessness has been reflected on Take Nothing For Granted, where at times he often seems to be inventing new genres or at least existing between the cracks. "Shuffle" is excruciatingly slowed-down dub, stripped of its rollicking funkiness, just plodding wearily along, and if you thought that was slow, "Mortal" is virtually comatose. Other cuts take a markedly different approach, though it's all quite difficult to define, like the skittering flecks of "Suture", the strange sonic waveforms of "Cement", or the abstract atmospheric noises and warm tones of "Progress". It's all ultimately pretty challenging and not at all derivative. In fact, it may be a little too uncompromising and distinctive for its own good. There are vague though undoubtedly unbalanced hints of dub running through this disc, however it is tempered by elements of electronica, sound design, and dark strange film soundtrack material. Utilizing numerous experimental techniques, Duke has fashioned a challenging and abstract album that is as inventive as it is diverse. (Bob Baker Fish)

Igloo USA
In eighteen short tracks Andrew Duke renews my faith in the world of slow-mo techno with a foot (and a half) in sounds less understood. Duke takes apart beats to the umpteenth degree on tracks like the poker-faced "Mortal" and the chirpingly shrill "2fwd1bwd." This is like a micronized, haunted dancehall record, filled with passion for phantom static in all its inherent warm nostalgia. The rampantly channeled "Fuel" zips fleetingly from ear to ear. One might venture to deem this a personal recording, in its depth it goes off course every now and then, seeming more journal-based than a straight shot of pure sound for someone else's ears. Though this makes for an interesting guide into the mind of a mad genius in the making. Take Nothing for Granted invites its audience into secret spaces harboring some real, raw fixtures upon which are built some incredible decibels. (TJ Norris)

All-Music Guide USA
Andrew Duke reinvents himself almost with every release. Take Nothing for Granted, released on his own Cognition Audioworks imprint, stands half-a-continent away from the long, oppressive drone pieces of More Destructive Than Organized while keeping its distances from Sprung, his beat-friendly CD for Bip-Hop. This album consists of 18 short tracks (mostly in the three- to four-minute range) focusing on low crackling textures. Clicks and cuts provide the basis of the material, their assemblage hiding complex patterns under a random facade. In some pieces, beat is reduced to a fugitive pulse. It is put forward only twice, in "Shuffle" and "Or," the latter being the only thumping track--it is also one of the strangest, with a sharp Pita/Mego flavor. (François Couture)

Grooves USA
In recent years Cognition Audioworks head Andrew Duke, host of the immensely influential "In The Mix" radio show broadcast from Nova Scotia, has unleashed a mini-torrent of releases, shifting somewhat peripatetically from style to style, though never straying too far from his roots in minimal techno. For my money, this latest release, which finds Duke in decidedly more austere and unstructured musical territory, is the most successful of the lot. The record reads like a musical sketchbook with each short track defined by the barest sonic lines and textures-a treble squeak here, the occasional quiet bass hum, and a ubiquitous soft electric crackle and that's about it. The most successful of these aural vignettes are the most stripped-down and abstract, with only the subtlest hints of dub emerging periodically out of fields of static. By contrast, when a repetitive beat creeps into the mix (on tracks like "Warning") or the number of ingredients passes a certain minimal threshold, the record loses some of its (admittedly rather subtle) momentum and cohesion. An intriguing, if occasionally frustrating, listen. (Susanna Bolle)

Exclaim Toronto
Delicate soundscapes are tough to do properly, since any mistake is immediately apparent. Therefore Andrew Duke has done a very good job with these subtle but interesting tracks. This is machine music with soft edges: static, vibrations, stutters, and other odd noises all make their appearance. Most of the tracks are slow or beat-less. Nothing rushed or frenzied happens. The tracks have a natural flow with variations in beats and ambient interludes, and the album holds together well. Particularly good are the slow beats, vibrations, and stutters of "Shuffle", the bird-like sounds and soft percussion of "2fwd1bwd", and the swooping processed noises and bass of "Britlur". (Philip Downey)

Pulse Niagara St. Catherines
Halifax-based electronic musician and broadcast DJ Andrew Duke is perhaps the most prolific musician in Canada. With countless album releases, most notably Sprung on France's Bip-Hop, and over 100 tracks licensed to compilations, Duke continues to push, releasing some of his most delicate sounds yet on his own label. Take Nothing For Granted is a collection of rhythmic atmospherics; minimal music with subtle shifts and complex textures that are as meditative as they are technical. Duke's Cognition label will be extremely busy in 2004 with releases by Clinker (Mutek), Foal (notype.com/nishi) and Granny'Ark (Om Festival) and a future release by Sweden's Formatt (abflugrec.com). (Marinko Jareb)

The Daily News Halifax
Andrew Duke puts his soul into his music. His latest recording, Take Nothing For Granted, continues the artist's sharp technical skill, a love of complex and simple rhythms, minimalism and, perhaps most provocatively, personal narrative. (Sean Flinn)